A Not-So-Subtle Movement of God 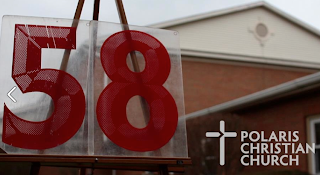 Sometimes, God's movement is so subtle you don't even realize He's responded to your prayers until long after the fact.  Other times, His response is so obvious you'd simply have to be as stubborn as 3-year-old refusing a nap to deny it (not that I've experienced such stubbornness firsthand...I'm just saying, I've heard it can happen).

We have no doubt that there will be countless stories to come of God's undeniable involvement in our ministry, and we feel it's important to share them with you so that you can be as sure as we are about what we're doing.  We've already failed to post some of them, but it only seemed right to start with this one...

Last week, I randomly messaged a long-lost friend on Facebook that I haven't seen or talked in years.  His name is Alex Poindexter - the best man in our wedding a few years ago (okay, it's been almost 15 years...geesh).   I'd been seeing posts of his about the church he is now the lead-pastor of, Polaris Christian in Brunswick, OH, and I wanted to just reach out and tell him how proud I was to see all the ways he was allowing God to use him.  It was pretty clear from the posts that God had convicted Alex and his wife Kelli of many of the same things He had convicted Erin and I of years ago.  This is from their church website:

You’ll understand our church better by reading this section from Isaiah 58:

“...share your food with the hungry and provide the poor wanderer with shelter... Then your light will break forth like the dawn... Then you will call, and the LORD will answer;  you will cry for help, and he will say: Here am I..."

God has called our church to be generous followers of Jesus! We have become a generous church. We also are striving to become a praying church. God says that when we show the love of Jesus to those in need, and call out to Him, we will become a blazing light in a dark world. That's where we're headed!

If you know us at all, you know this is our heart as well.  Isaiah 58 has been such an integral part of our  story from the beginning, and a big motivating factor that lead to our adoption and to this move.  I think it's pretty cool to see how God has used this passage in all four of our lives, even though we've lived so far apart and barely spoken to each other for so long.

So I wrote to encourage.  And he wrote back, saying, "It seems like you guys are doing some wildly generous things yourself!"   I assumed he was referencing our big move into the mission field, but after a couple more messages, I realized he didn't know anything about it.  So I explained, in a nutshell, what we're doing.  Here was his response:

"hour ago I prayed that God would show me where to send $1,500 from Polaris.
Seems like you're it. Where do we send the check?"

I replied with "You've got to be kidding me."  Seriously.  While Alex was praying for God to reveal to him where they should send $1,500, I was writing him to explain our ministry to him for the first time. An hour after he prayed, he checked his Facebook and saw my message.

I realize anything can be written off as coincidence.  Heck, "Even after Jesus had performed so many signs in their presence, they still would not believe in him." (John 13:7)  But after begging God to move, randomly writing an old friend I haven't talked to for years, and the incredible timing of his prayer and my message, well...

I guess I just don't have enough faith to believe this was coincidence.
Posted by THE SMITH FAMILY at 8:48 PM

THE SMITH FAMILY
A Hoosier, a Buckeye and two Rwandans out on a mission to serve the world. Missionaries for Rwanda through AFRICA NEW LIFE MINISTRIES. We are entirely donor-supported, so if you'd like to partner with us through prayer or finances, we would LOVE to set up a time to chat!